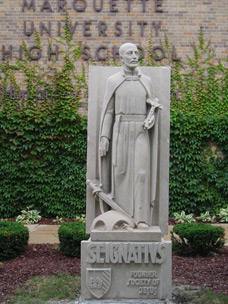 Marquette University High School is known for its commitment to educational excellence in the Jesuit tradition and traces its roots back more than 157 years.

Marquette High traces its roots back to 1857 when St. Aloysius Academy opened and was located at Second Street and Michigan Avenue in what is now downtown Milwaukee. In 1864, the students of St. Aloysius moved to a new building, and the school's name changed to St. Gall's Academy.

Hard times forced St. Gall's to close in 1872, but in 1881, a new Jesuit school opened "on the hilltop" at 10th and State Streets. It was named Marquette College but educated students beginning at age 14. Boys studied for a total of six years before receiving a college diploma. The first three years were the equivalent to a modern-day high school, but diplomas were only awarded after students completed the full six years, not for the first three "academy years."

The location of the building gave rise to the nickname we still bear - the Hilltoppers.

In 1907, the expanding academy and college were separated and the academy extended its courses to four years, after which a diploma was awarded, just as now. The college, now known as Marquette University moved to its present location, 12th Street and Wisconsin Avenue.

In 1922, Marquette Academy changed its name to Marquette University High School and moved to its present location at 3401 W. Wisconsin Avenue thanks to a major financial gift from the Johnston family by Ellen Story Johnston in 1925.

The contemporary gym building was added in 1961 where there had been a football practice field - dubbed "the rock pile" by generations of bruised athletes. Various interior modifications of the 1925 building have been made to accommodate the present enrollment. Rooms have changed functions many times, but through it all it a "jug room" has been preserved.

Late in 1986, the High School purchased the property adjacent to the school from the estate of Glen Humphrey for use as the Humphrey Athletic Field. The school also purchased the lot on 35th and Michigan Streets as an auxiliary parking lot. The Gordon Henke Center and the Emmett J. and Martha Doerr Library opened in 1994.

In 1998, Marquette High School dedicated Quad Park, a multi-use facility located at 38th and St. Paul. Thanks to the generous support of donors, with the lead gift coming from Harry '54 and Betty Quadracci, a $1.3 million dollar renovation occurred on this 10-acre site. Quad Park offers state-of-the-art soccer and track facilities.

The new millennium has brought more changes and upgrades. In 2000, all the classrooms on the fourth floor and two science rooms on the third floor were renovated with four new classrooms being created in the former third floor chapel. Bob Hansen '41, and his wife, Marie, and their family provided $1 million gift for the classroom renovations. A $350,000 grant from the Rose A. Monaghan Trust (Wally Schmidt '47, Trustee) was used to renovate the science classrooms, provide technology wiring and update the entire third floor corridor.

During the summers of 2001 and 2002, parking lots were expanded and beautified, and in 2003, the second floor was renovated as well.In 2008 the school launched the most ambitious construction project yet. The former Jesuit residence was razed and replaced with a two-story addition attached to the school that includes fine arts classrooms on the first level and administrative space on the second level. A new chapel called Three Holy Companions was built at the school's entrance. It's named for St. Ignatius Loyola, St. Francis Xavier and the Blessed Peter Favre, the men most associated with founding the Society of Jesus.

Additionally, the old third floor gym was renovated into science classrooms and labs and although state-of-the-art in their design, our alumni will be pleased to know that the memories of the old gym have been preserved by having its four walls remain untouched in these classrooms as a tribute to our past. Athletic areas and the chemistry labs were also renovated while central air conditioning was installed on the first and third floors.

In 2011, the Aldine Apartment buildings located just east of the school and purchased in 2008 by Marquette High, were closed and then demolished to make way for future school expansion. The cafeteria and kitchen also received major renovations during the summer of 2011.

Generations of teachers, students and benefactors have contributed to the heritage we now enjoy. Each generation in its turn is equally important in maintaining our spirit. We have a rich tradition in which we take great pride. It's important to realize the responsibility of adding to that tradition by striving to be Open to Growth, Intellectually Competent, Religious, Loving and Committed to Justice.