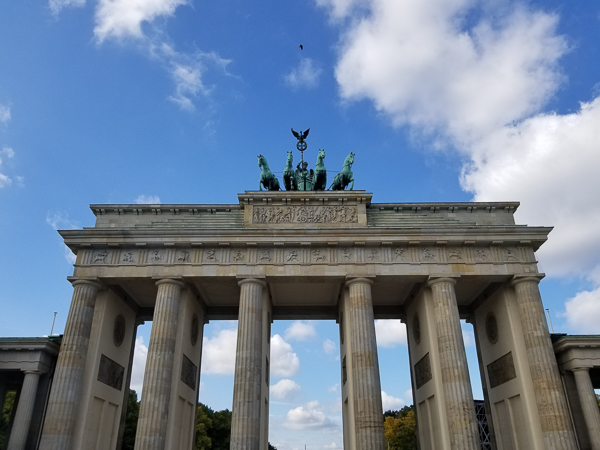 The city of berlin is an incredible place, filled with many unique and different places. The things I have experienced in Berlin are without a doubt some of the coolest things I have experienced in my life. Some of my favorite Berlin sites included the Memorial and Musem at Sachsenhausen (a former concentration camp), Mount Mitte, and the Reichstag building. There is so much history to this city, and I have enjoyed exploring these marvels with Herr G and other German students from MUHS.

On Friday we went to the Sachsenhausen, which was used as a Nazi Concentration Camp and Soviet Special Prison. This experience was incredible. It was simply unbelievable to learn about the terror inflicted upon innocent people. It was incredible to see the reign of oppression of the Nazi and Soviet governments. The part of the concentration camp which affected me the most was the death house, where prisoners and “undesirables” were killed in the most brutal and evil ways. The experience I had at the Sachsenhausen concentration camp was one of the most impactful moments of our trip.

On Wednesday morning we went to Mount Mitte, which was a super fun and crazy experience. I still cannot believe that I participated in an obstacle course which was three stories high in the air. I have a massive fear of heights, and I still am in shock three days after this experience. It was so fun, but it was also crazy at the same time.

On Friday evening we visited the Reichstag building, and walked up the massive glass dome at the top of the building. Here we were able to see Berlin and all of the places we had been too so far. It was amazing to be so high up in the center of Berlin and have such an awesome view of Berlin. This was an awesome experience to be able to see the entire city, and to recognize the countless historical landmarks of Berlin.

My trip in Berlin has been absolutely amazing and it has been extremely fun to travel with Herr G and the guys. The experiences on this trip have been unbelievable, and I can’t wait to experience Ingolstadt and Munich. 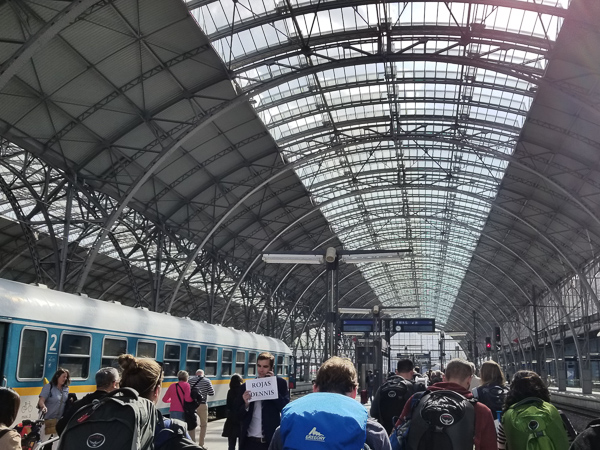 Coming to you from the train to Ingolstadt, means we have departed Berlin. As Conor Lafferty had once said, “Berlin is like New York City.” Berlin is full of massive and beautiful memorials, key landmarks in German history, and buildings. Traveling around the city is no simple task. We travelled by tram, bus, S-Bahn, U-Bahn, and by foot. We walked so much, that by the end of the day we were comparing how many steps we each took. Most of us were around 23,000 steps every day in Berlin, which is about 10-11 miles. The streets and sidewalks were also hard on the feet, because they were mostly made out of cobblestone.

We visited many places in Berlin. One of the first places we visited was the Memorial to the Murdered Jews, and underneath was a museum which gave us a sense of what the Jewish life and death was like during their persecution under Hitler and it gave us some history. The actual memorial was amazing. Above ground the concrete blocks started out short around the edges, and got taller towards the middle. Some as high as 15 ft. from the base. It covered a whole block, too. Some other landmarks around the memorial included the Brandenburg Gate, the Tiergarten, Victory Tower, and the Reichstag. The Brandenburg Gate is a giant doorway with 12 columns. On top stands Viktoria, the goddess of victory driving a Quadriga. If you were to go through the entrance of the gate, you would see a road going straight to the Victory Tower, which is in the Tiergarten. Luckily we didn’t have to climb up on the first day we got to Berlin, because I basically pulled an all-nighter and had no sleep for a bit over 24 hours. But, we did climb the tower on a later date, and the view was amazing after climbing over 200 steps. On top of the tower, a bronze statue of Viktoria sits, just like the Brandenburg Gate. The Tiergarten surrounding the Victory Tower is like Central Park, because it is massive. It is full of trees mainly the same height because all of the trees were planted at the same time. Most of the trees originally planted were used as firewood by the citizens of Berlin in the difficult years directly following WW2. In the park, many little memorials can be found.

On our Last night of Berlin, we got to go on a tour of the Reichstag building, which is the capital building of Germany. On top sits a glass dome, where we walked up to the top. Since our tour was at dusk, we got to see Berlin turn on its lights and it was beautiful. We could see the whole city from up there. Berlin was a spectacular site. 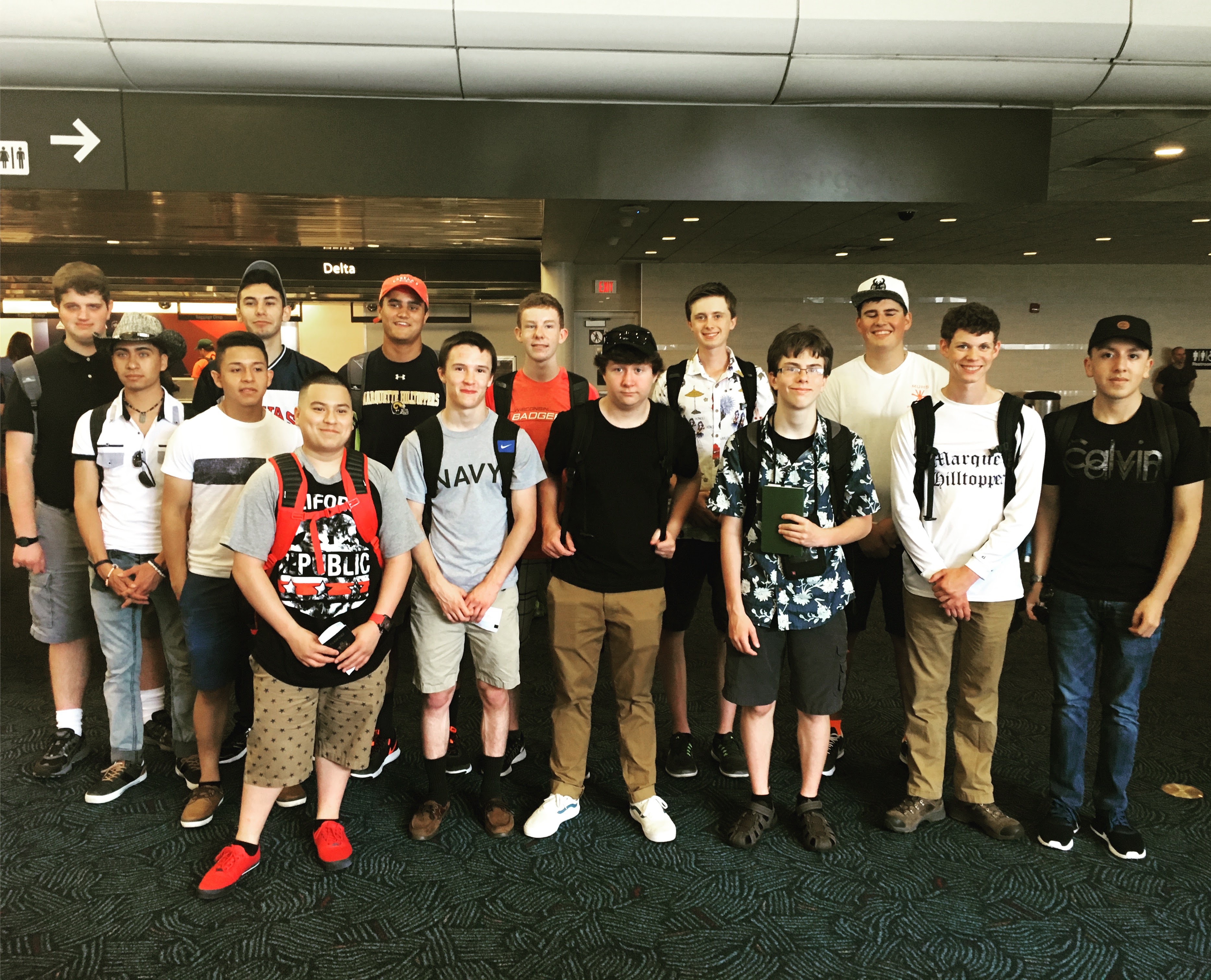 My ears feel discombobulated and I felt nauseous at times but I love the thrill and adrenaline that the airplane rides gives me.

I have never left the country nor been so far away from my family and home. I am having a blast with teachers and students. I have not had much sleep but it is all worth it. I am very grateful I have been given this opportunity and I will never forget this experience.

Oscar will be a Sophomore in German Level 2 in the Fall. 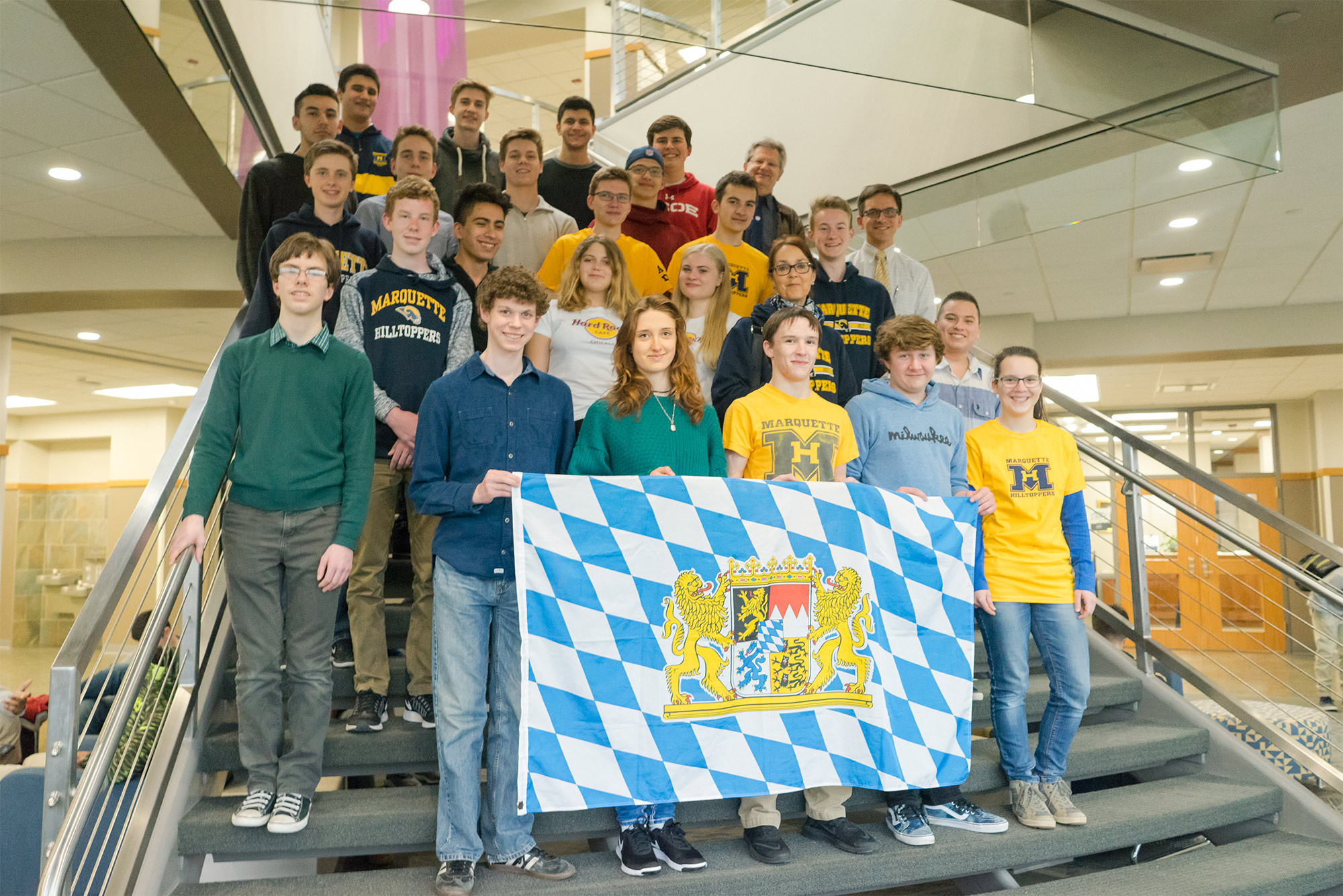 It's finally come. A day of so many emotions and thoughts and ponderings. Herr Grusenski here, kicking off our 2017 German Exchange blog, a neat new feature on our MUHS website that will highlight all of our summer trips that will include more students than I can guess. Today, June 12, 2017, is the day we will travel to Germany.  Guys have been dreaming about this all school year long and into the summer and now it’s here.  We hosted our friends at MUHS and in the homes of students back in March (see picture) and now they will host us at their school and in their homes.

It’s finally come. A day of so many emotions and thoughts and ponderings. Herr Grusenski here, kicking off our 2017 German Exchange blog, a neat new feature on our MUHS website that will highlight all of our summer trips that will include more students than I can guess. Today, June 12, 2017, is the day we will travel to Germany.  Guys have been dreaming about this all school year long and into the summer and now it’s here.  We hosted our friends at MUHS and in the homes of students back in March (see picture) and now they will host us at their school and in their homes.

This will be my sixth trip to Germany as part of an Exchange program.  I went first in 2001 after my first year learning German in high school at St. Peter’s Prep, the Jesuit high school in New Jersey. The trip hooked me. I was floored by a German world that I am still learning about today.

16 years since then and a lot has changed; about the country and about myself.  What has not changed is that there are still curious students (like I was!) who are willing to sacrifice any rigid concepts of the world that they have and to courageously say “Yes!” I mean “Ja!” to a new and totally different world.  As much as the homework and classwork and reading is what we do and live for at MUHS, this kind of stuff is what we live for too.  I hope you enjoy following it too!  Stay tuned for a pre-travel perspective from our oldest and youngest students on the trip, Oscar ’20 and… whoever the oldest one is!